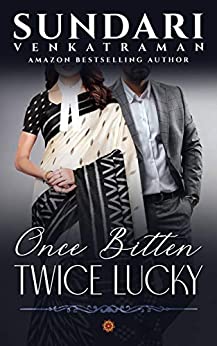 I received Once Bitten Twice Lucky by Sundari Venkatraman as a review copy from the author and I am thankful to her for the same.

Deepshika feels as free as a bird once she decides to kick her womaniser husband out of her life. The lawyer is confident of bringing up her teenage kids with her father’s help.
Karan isn’t all that upset when his wife dumps him, leaving behind their preteen daughter for him to bring up. But the alimony she claims comes as a rude shock.

Sparks fly when the shocked husband meets the divorced, divorce lawyer. But what will happen when their respective children come face to face? Will they accept their parents’ relationship or rebel against it?

Will the once bitten Deepshika and Karan be lucky in their relationship the second time?

Thirty six year old Deepshikha Arora Narang is a divorce lawyer in Delhi. Married at eighteen to Mahesh Narang, Deep has a fifteen year old son, Darsh and a twelve year old daughter, Myra. Aware of her husband’s indiscretions, Deep keeps quiet for the sake of her children and her father, until an email from one of the commissioning editors brings everything out in the open. And Deep decides to divorce her husband with the support of her children and her father.

Thirty nine year old Karan Iyer had met Dhwani in his first year of college and married her six years later. They have a twelve year old daughter, Krutika, who is the apple of her father’s eye. But all love is not lost between Karan and Dhwani, and Karan immerses himself in his business and Dhwani in her housework, until one day, Dhwani leaves the Iyer home with not a single word to anyone but three letters, one addressed to Karan, one to Krutika and one to Karan’s mother. And she takes the locker key as well as the debit card for their joint account.

Karan wants a divorce, so he approaches Deepshikha. And …..

I loved the cover and the story. The characters are realistic, and so are their emotions and conversations. I loved the kids as much as the main characters. I loved Deep’s relationship with her kids as well as her understanding father. I love how Darsh was so mature and protective towards his mother and sister. Krutika and Karan’s relationship has been portrayed beautifully.

The language is simple and the story is fast paced, I finished it in one sitting and loved every moment of the book. What I loved most was how the author connected this book to one of her previous one.

DISCLAIMER: I received a free e-book from the author in exchange of an honest review. I have not received any monetary compensation for the same.

I received A Very Dixie Christmas by Lauren Clark as a review copy from StoryOrigin and I am thankful to them for the same.

Discover the magic of the holiday season with this standalone sweet short story from author Lauren Clark! This holiday season, bakery owner Patricia Dye “PD” Jordan makes a wish to save her 8-year-old daughter’s faith in the magic of Christmas. After a classmate attempts to convince Ella Rae Santa Claus isn’t real, PD, with the help of her adorable UPS man, Daniel, restores her daughter’s belief that miracles, large and small, can happen during the holiday season. Along the way, PD discovers her own recipe for true love and lasting happiness.

A single mother, PD owns a small bakery in Eufaula, Alabama, Ella Rae’s Sweets, named after her eight year old daughter, Ella Rae. A year ago, PD’s grandmother and brother helped finance her venture. Ella is a precious and a precocious child and believes in the magic of Santa Claus, writing a letter to him every year asking for gifts. And this year, she is writing her letter very late, on 21 December, and PD has no clue. And to make matters worse, Ella’s classmate, Arthur Cunningham, tells her that Santa Claus does not exist. Her best friend, Daniel, saves the day for her, but not before Ella shreds her letter and PD has not had a chance to peek into it.

This is a short story set in a small town in Alabama.

Written in first person from the point of view of PD, this book restores our faith in the magic of Christmas. I loved PD and the pains she is going through to keep her daughter happy. I loved Ella too. The scenes have been described so well that I could actually visualize them.

The language is simple and the story just flows.

DISCLAIMER: I received a free e-book from StoryOrigin in exchange for an honest review. I have not received any monetary compensation for the same.