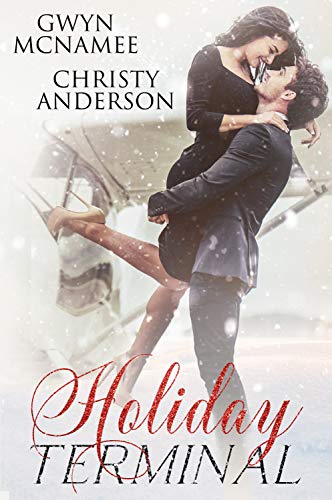 I picked up Holiday Terminal: (A Second Chance Secret Baby Billionaire Holiday Romance) (The Warren Family Holidays Book 1) by Gwyn McNamee and Christy Anderson from the Kindle Unlimited Library because I liked the blurb.

Two hearts. One snowstorm. A second chance at love.

Penelope
Swirling snow may have stranded me at this tiny airport in the middle of nowhere on Christmas Eve, but it has nothing on the storm raging inside me when he walks into the terminal.

My first love and the man who shattered my world.

I thought I locked my feelings for him safely away in the past, but one look is all it takes for me to drown in his icy blue eyes again.

So much time has passed.

I’m no longer that naïve teenager standing on a beach, wishing the boy would choose me.
Now, I’m hiding a secret that could unravel both our lives.

Artemis
The emergency landing in Nowheresville is more than an inconvenience.

The annual family holiday party in NYC was my chance to make the statement I’ve been dreaming of for so long.

Now, all my best laid plans will have to wait until I can get out of here and back to civilization.
Nothing can salvage this day.

Yet seeing Penelope Barnes again turns this bad situation into the opportunity of a lifetime.
Reuniting with the only woman I’ve ever loved would be the ultimate Christmas gift.

But how can I heal the old wounds and or fit into the new life she created?

When temperatures drop and snowflakes fly, can love find a way to weather the storm for the ultimate Christmas miracle?

Penelope Barnes, Pen, the only child of her parents, lived in Cape harmony with her parents. At seventeen, she met Artemis Warren III, Artie, who was visiting the small beach town with his family for summer holidays, and fell in love with him. Only to realise that Artemis would leave her and go to law school like his father and his grandfather.

Now, six years later, Pen is travelling to Cape Harmony from Nashville, on Christmas Eve, with her five year old son, Max and her mother, in her boss’s aircraft, when they encounter a snowstorm and the pilot cannot do anything but land on the closest airport, which happens to be Millerton Field, a small strip in Tennessee near the North Carolina border. After a day of tiring meetings, as a producer’s assistant, all she wants is to reach her parents’ house because Max deserves that much.

Artemis Warren is flying to New York after closing a case for Warren Enterprises when he is caught in the middle of the snowstorm and is forced to land at Millerton Field. Happy to be away from the Warren holiday party but sad as he would not be able to make an important announcement, Artie decides to wait until the storm lifts and he can get out of there.

He meets Pen and old feelings surface. But Pen wants nothing to do with him, because she feels betrayed. And when he sees Max, he realises that Pen has been hiding something from him.

A sweet, warm, second chance romance is what we need on a cold winter night, and this book is that and more. The cover is beautiful.

The characters are lovable and the story has been written from the point of view of both of them. I loved Max and Pen’s mother as well.

This is the first book in the series and I am looking forward to reading the stories of Archimedes and Athena as well.