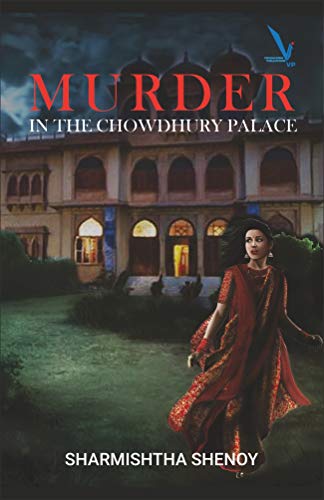 I received Murder in the Chowdhury Palace by Sharmishta Shenoy as a review copy from the author and am thankful to her for the same. This is a murder mystery full of twists and turns.

Orphaned in her childhood, Durga has always longed for wealth and security.She finds it all when she marries Debnaryan Chowdhury, heir to an immense, multi-crore estate. But there is a curse on the family, due to which the first-born of each generation dies young. When her father-in-law Birendrnath dies unexpectedly, Durga and Debnaryan come down to the ancestral home, near Kolkata. The Moment Durga enters her new palatial home, she crosses a threshold of terror. She loses her husband within a month of her marriage and inherits the estate. Family and friends believe that Debnaryan died due to the curse on the Chowdhury family. But is it really her bad luck that Debu died? Was Debnaryan’s death an accident? Everyone in her new family and the neighborhood appear to be sympathetic. Yet, most of them have a motive to kill her. Is she now on the murder’s radar? Or is she the master of the game?

Durga’s parents died in a car accident when she was six and she was brought up by her grandmother till she was 10 and then by her maternal uncle and aunt. Her aunt did not like her so she was sent to boarding school and her parents’ property was taken away from her. And while she grew up in poverty, her uncle and his family lived comfortably off her parents’ hard earned money. And she understood the value of money at an early age and promised herself that not only would she become successful in life, she would also become rich and famous.

In school, she had no friends but books and music for companionship and she loved physics and maths and wanted to become a scientist. She joined Presidency College for her undergraduate studies in Physics and met Nagendranath, Nag, her batchmate, an orphan like her and he became her friend and mentor.

She and Nag met Debnarayan Chowdhury while they were doing their Masters in Pure Physics. And the three of them became inseparable. Debu belongs to rich family but their family is cursed: the eldest son dies without producing an heir. Durga and Debu fall in love with each other and get married. And then they receive the news of Debu’s father’s demise. So Durga and Debu leave for Debu’s hometown and Nag goes to the USA for further studies.

In the village, the big joint family has problems accepting Durga, but her mother-in-law accepts her. And then Debu dies under mysterious circumstances and unexplained things start happening in the palace.

The cover is very apt for the title. And the book begins with a family tree which looks complicated but is easy to comprehend as the story moves. Though there are many characters in the book, but the way the author introduces them into the story does not confuse the reader.

The story has been written in first person from the point of view of Durga. And I was hooked to the book from the point where Durga introduces herself.

The characters, though many, have been introduced beautifully and it was easy for me to follow them without getting confused.

The story has love, friendship, family relationships, and most of all suspense and the twists and turns that keep coming up unexpectedly make the story unputdownable.

The author has developed the plot well and the suspense is not revealed till the end. Everytime I felt that I knew who was behind it, I would be wrong. The language used is very simple and easy to follow and the story is paced well. The scenes have been described in detail and that adds to the beauty of the story.

DISCLAIMER: I received a free ebook from the author in exchange for an honest review. I have not received any monetary compensation for the same.

One thought on “Murder in the Chowdhury Palace by Sharmishta Shenoy”