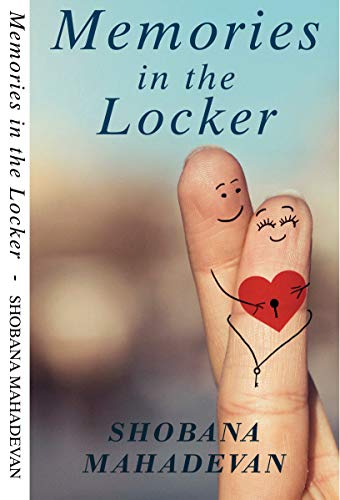 Having liked Shobana Mahadevan’s books, I picked up Memories in the Locker from the Kindle Unlimited Library.

I was engaged to my best friend. And I held a wonderful management position. I should have been ecstatic. But I was not. I realized that the original passion that I had for Sid had not dimmed with the passage of time. And my management position? Well, I had absolutely no passion for it! However, I was almost ready to grit my teeth, accept reality and move on when my whole world collapsed.

And while I was still struggling in the throes of depression, my dad passed away.
And it was during that lowest point in my life that I made a shocking discovery. I stumbled upon my dad’s past love affair. A past strong enough to haunt me. A past strong enough to make me undertake a journey to uncover my dad’s secret.
Did I uncover my dad’s secret? Will I have the courage to throw caution to the winds and follow my heart?

With the memories of my golden days still lingering in my mind, will I get a second chance?

Nikitha and Ankitha are twins and are as different from each other as chalk and cheese. They have grown up in a big joint family with four cousins in Coimbatore. Their father has supported the education of all the kids. Then Ankitha went on to do medicine and Nikitha went on to do her graduation in chemistry and followed it up with an MBA because people said that she could make more money from a management position and she wants to support her father financially. During her MBA at Chennai, she meets Siddharth, her senior, they become friends and he asks her to marry him. And then she meets his fiancée.

Now, five years later, Nikitha has been working in Bangalore since three years and her best friend has proposed marriage which she has accepted but is not happy. She still thinks of Sid. But then she is laid off and goes home when her father dies to find a letter in the locker, and she is off to solve the mystery.

The story has been written in first person from the point of view of Nikitha, Nikki and is about friendship, family and romance. The language is simple and the characters have been developed well. Though initially, it took me time to get a feel of the book, but then as we moved into flashback, I was hooked.

The story moves from place to place, from Bangalore to Chennai to Coimbatore and them more.