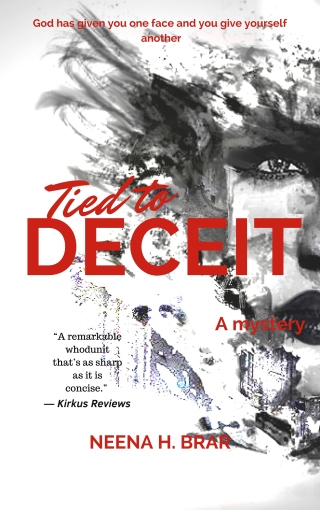 I received the book ‘Tied to Deceit’ by Neena H Brar as a review copy from the author. Thank you for the book, Neena. It is a murder mystery set in Sanover, Himachal Pradesh, India in 1974.

On a drizzly August morning, the inhabitants of the hill town of Sanover, Himachal Pradesh, wake up to the shocking news of the murder of the exquisite, secretive, malicious, and thoroughly immoral Devika Singh.

As Superintendent of Police Vishwanath Sharma begins to sift through the hidden secrets of Devika Singh’s life, it becomes evident that everyone who knew her seems to have a clear-cut motive for killing her.

Faced with the investigation of a crime that appears to have as many suspects as there are motives, Vishwanath Sharma probes the sinister web spun around a tangle of lies and deception.

Dr Rajinder Bhardwaj, owner and head physician at Lifeline Hospital in Sanover, Himachal Pradesh and his wife Gayatri have been married for twenty four years. Though they have kept a façade of happy for the world, but actually Gayatri is aware of her husband’s infidelities and ignores his unfaithfulness. One day, she receives a letter and catches him red handed with the receptionist at the hospital, Devika Singh.

As the couple is childless, his nephew Rudra, the son of his estranged brother, also works in the same hospital and is ambitious and greedy.

One morning, Devika is found murdered in her bed. Though, she is one person nobody likes, but no one ever thought that she would be killed.

SP Vishwanath Sharma is the officer responsible to investigate the murder. As he starts his investigation, one person leads to another and the plot thickens. He and his aide, Rawat go from person to person and from place to place to investigate. There are many suspects and the best part is that all of them have a motive to kill her.

The story is a murder mystery with one clue leading to another and one suspect leading to another. The characters are realistic and well developed. Though there are many of them, each has a role to play in the story.

The scenes and nature have been described in detail. So also the various settings. The language is simple and easy to follow.  Each chapter begins with a quote which gives an idea of the chapter.

The author has tied up the loose ends well and the book feels complete at the end. The chapters are short. The book moves at a slow pace in the beginning but the pace increases at the end.

A little bit of editing would make the story crisper. As a debut author, to write a book that is 390 pages long with minimal mistakes is an achievement.

Loved the book and am looking forward to more from the author.

DISCLAIMER: I received the book as an ARC from the author in exchange for an honest review. I have not received any monetary compensation for the same.

One thought on “Tied to Deceit by Neena H Brar”