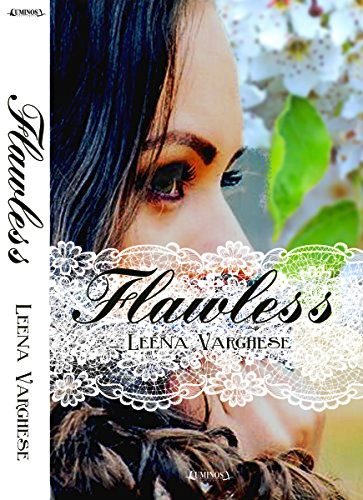 I received the book Flawless by Leena Varghese as a review copy from the author and I am thankful to her for the book. The book is all about second chances set in Pondicherry.

Giana Francois does not nurture fanciful dreams like the young women of her age. Her elopement and broken marriage with Ricky Bartholomew had led to a series of tragic events that changed her life forever. Her reckless behaviour has cut a deep rift in her relationship with her mother.

Now, her two-year old son, Toby, is the centre of her world. Giana works at her mother’s cafe in the beautiful, seaside town of Pondicherry. Her reputation as the bad girl shadows her every step, making her tread with caution. Underneath the placid surface is the terrible guilt of having brought shame to the family.

When Giana meets a brooding stranger, late one night at the cafe, her first reaction is to avoid him. But Max Martineau is not a man to be dismissed as easily. When their paths cross inadvertently, Giana realizes that Max is a kindred spirit. He reflects what she has suppressed for a long time…all that she longs for…But she is afraid to reach out and claim that dream for herself.

To Max, Giana represents sublime grace and companionship. But he refuses to admit that he needs her to be whole again even though he is irresistibly drawn to her. Even as his attachment to Toby and Giana grows deeper, he is fighting a losing battle with the dark memories that rise from his own private hell.

As their friendship blossoms tentatively like a delicate flower in a blizzard, Giana finds a safe harbour in Max. And Max finds peace in her company. However, neither of them acknowledges that they belong together.

Until Giana’s past surfaces to hound her…

Will Max relinquish his past to protect Giana and claim her as his own?

Georgiana Francois had fallen in love with Ricky Bartholomew, the rock band drummer at a wedding reception, at the young age of 19. She had eloped with him and got married to him only to be deserted by him. Not only this, she had lost her only brother, Michael in a road traffic accident and her father, a week later and her mother had never forgiven her for causing their deaths. In all this Giana had not only lost her old self but also her reputation and the fight. She lives in the constant fear of being shamed with the worst criticism from her mother.

Now, Georgiana is divorced and lives with her two year old son, Toby; her mother, Carol and her younger sister, Annabelle in Pondicherry. She has a catering service which deals with clients having young children. She also helps her mother in her café, Crème Caramel and Coffee, in the bakery and also supervising the staff. She prefers to work behind the scenes.

One late evening, when her mother and sister are out shopping for the café, and the staff had already left for the day, she is sitting in the back office doing her accounts and keeping an eye on Toby who is running around the place, picking and sucking spoons. And there is only one customer in the café, whom the girls have named Table No 5 as he comes and sits on that particular table every day at six in the evening.  And then, Toby goes and topples and entire tray of cups and before she reaches Toby, Table No 5 has already picked him up out of harm’s way.  And it is at that moment that her mother and sister come in and her mother admonishes her for leaving Toby unattended and talking to strangers.

Table No 5 is Maximillian Alexis Martineau, an architect, who is on a project to Pondicherry and has bought the bungalow next to the Francois home, the bungalow that does not look lived in according to Giana. Max is a brooding lonely man who has lost his wife and little son in an accident for which he blames himself.  He spends his time in an emotionally sterile office environment as a deliberate move to remain detached.

Their paths cross and they become friends. But they are both not ready to commit yet and then Ricky comes and has a proposal for her…..

The cover is beautiful, an instant pick me up. And the story touches somewhere deep.

The language is beautiful and the story just flows. The characters are well etched and their maturity is visible. I loved the conversations between them. The author has described the feelings of both the characters in detail. The scenes have been described beautifully and are believable.

This book is a must read.

Disclaimer: I received a free e-copy of the book from the author in return for my honest review. I have NOT received any monetary compensation for the same.