Every Time It Rains by Nikita Singh 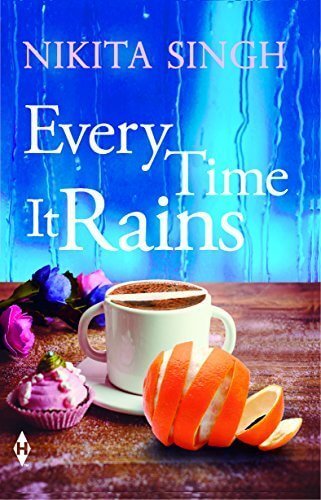 is the second book by the author that I have read. It kind of takes off from where she had left off ‘Like a love song’. This story revolves around Laila.

She had braved the storm and knew she would be okay. Until he offered her an umbrella and showed her life could be so better than ‘okay’.

Laila was once in love; it left her hurt and grieving, but also stronger. She never looked back. And why should she? She is happy- and bus, with a popular bakery franchise that souls go national if she pulls off that big deal. Between a job she loves and friends who support and value her, Laila thinks she has it all. Until one fateful meeting rouses familiar passions that call for all of her courage to pursue.

She should have nothing to do with JD, an impetuous, free-spirited creature stirring up her calm existence. Yet, they find themselves irrepressibly drawn to each other. But can Laila trust him? He is, after all, her exact opposite. If she’s self-destructive, he’s life-affirming. The more she gets to know him, the more she wants to, but the demons from her past still haunt her present, holding her back. But here’s the thing: he makes her feel things she never knew she was missing.

Every Time It Rains is the story of every girl who has ever had her heart broken. And been brave enough to love again.

Maahi tells Laila about an opportunity to work with a coffee stores chain, Roast House, but Laila is reluctant to do so. Maahi asks her to just try it and so Laila reluctantly agrees to meet JD, Jayesh Diwakar, the head of Marketing at Roast House.

JD is what Laila is not. He is funny, has a smile on his face all the time, he is positive. But they have one thing in common, both of them love old hindi songs. And JD has a song for every occasion which he hums.

Why is Laila so serious? And what is JD hiding behind his smile? Read on to find out.

The story can be read as a standalone even if you have not read the prequel. The language is simple and the flow is good. Though initially, it took me a lot of time to get a feel of the book, I actually started reading the book twice and left it at around twenty pages both the times, but this time when I got reading, I was finding an excuse to not keep the book down as the story started growing on to me.

The author has concentrated on developing the character of Laila, a little more about JD would have made it more interesting.  And I would have loved to read more about JD and Laila’s response.

The author has used hindi words, a vocabulary at the end of the book could be more useful for non-hindi speaking readers. Though for me, it added to the Indianness of the book. The songs that JD would sing, I found myself humming them as I was reading the book.

The relationship between Maahi and Laila has been beautifully depicted. They share a health professional and personal relationship. JD’s character was like the bright spot in the book even though there was a lot that could have been written on him.

The bakery backdrop was something that gives brownie points to the story.

The book is a one time rad and I have a gut feeling that as I am writing the review, the author is already writing a sequel to this book, the story of Maahi and Siddhant, with a lot of Laila and JD thrown in.