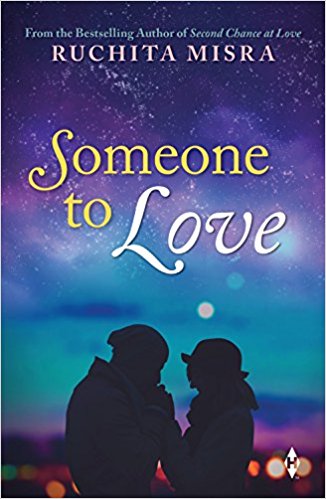 Someone to Love by Ruchita Misra is one book  which made me cry and not realize that I was crying. I read this book twice and cried the second time again. This book is the story of Koyal and Atharv- once friends- ex-soulmates- lock and key- pieces of a puzzle.

Not everyone is lucky enough to find this kind of love. Koyal and Atharv are childhood friends. They are also soulmates. Confidantes. Kindred spirits. They are made for each other- only, neither of them seems to have figured it out just yet. As they grow into adulthood, they turn to each other in sorrow and joy, only becoming closer. But then one day, something happens, and their rare friendship is cruelly transformed into something a lot like hatred. Atharv, scarred and hurt, fumes with anger, while impetuous Koyal presses the self-destruct button.

Years later, just when they’ve both found peace within themselves, their paths cross again. And destiny, that strange creature, has a few tricks up her sleeve. Will these two ever forgive each other? Or have they already lost their one chance to find someone to love?

Arthav Jayakrishna and Koyal Hansini Raje are friends since they were five years old. They are 4 am friends- neighbours- soul mates. He knows when she needs him and she fights for him. He is the calmer one and she, the aggressive one. She feels that their friendship is like the sea- deep and endless. He creates an email id for her on her twelfth birthday and she never uses it.

Their mothers Surya and Priya are friends. Once they finish school, Atharv gets admission into Indian Medical Institute, Delhi and in order to be near him, Koyal takes up admission in an engineering college in Ghaziabad. And the two of them leave Bhopal and move to Delhi.

On the first day of college, Atharv meets Nili Verma, his classmate. They become friends but his friendship with Koyal remains the same. Until one day, Koyal cuts off all communication with Atharv. She does not even tell her parents what happened and forces them to stop talking to the Jayakrishnas. Atharv comes to Bhopal looking for Koyal but is disappointed and hurt to find their family gone with no address.

Koya leaves her studies, gets married to Amit and tolerates getting abused by him for four years after which she finds the courage to divorce him. She comes back at her parents’ place with no friends, no money, no career and no education. Her father has not spoken to her in years, her brother is busy with his own life and her mother is unwell. Her brother and father are disappointed but the only person who supports her is her unwell mother who dies.

Six years after her mother’s death and after completing her MBA from IIM Bangalore, Koyal is on the way to London where she would be working as Global head of product at Sunsoft, she meets Mrs Hema Chandra, professor of marketing at London Business School and they become friends. Hema and her husband like Koyal and she becomes a regular visitor to their house. While visiting the Chandras on Mr Chandra’s birthday, Koyal comes face to face with Atharv, a renowned paediatric neurosurgeon.

After 10 long years, the best friends are now strangers. Initially, she refuses to acknowledge him. She meets his mother and daughter, Mansha. Initially, she does not want to like Mansha, as she reminds her of Nili, but then she remembers her mother’s words and Mansha and she get along well together, until one day………..

The simple story written in a simple language with so many emotions thrown in makes it a book worth reading again and again. There is friendship, love, jealousy, hatred, loss and tragedy. The story flows at a comfortable pace.