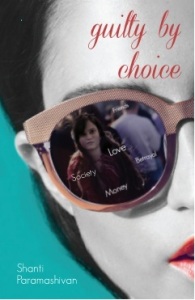 I received the book Guilty by Choice by Shanti Paramashivean as a review copy from the publisher and would like to thank them for the same. It is the story of Kiana Shetty, a girl who wants to do everything for her family.

Kiana Shetty is a young, dynamic and beautiful girl who lives in Mumbai with her mother and a younger brother. Like every recent graduate, she dreams of making it big and making it big quickly. But fate may have other plans for her in the form of her own brother: meet Viraj, Kiana’s younger brother, who works at a call center but wants to open his own tattoo studio some day and he will do anything to make that happen.

Mumbai is known as the city of dreams and they say if you’re brave enough to shoot for the moon, you’ll at least land up among the stars. Viraj sets out to do just that, but he may have taken the help of some very different means to achieve his dreams. While Kiana deals with Viraaj’s dreadful secrets, she also has to put up with Abhit, Viraaj’s best friend, who won’t stop professing his love for her at every opportunity he gets. It looks like the only person she can trust in all this hullaballoo is Sarthak, her best friend and collegue. But for how long?

Will Kiana be able to get out of the mess that she actually has nothing to do with? Or has Viraj already gone too far that Kiana can’t help but be collateral damage?

‘Guilty By Choice’ is a story about dreams, about love, about friendship, and above all, family. Because in the end, you do it all for the family, right?

Kiana Shetty, 21, lives with her mother and brother, Viraaj, in a rented accommodation in Mumbai. She has just finished her graduation and is in search for a job because she wants to get her house and her father’s factory back after paying off the debt. Their father left them seven years ago when Kiana was fourteen because he blamed her mother for the debts.

Viraaj works in a call centre and Kiana also ends up getting a sales job.  Viraaj wants to open a tattoo studio and can stoop to any level to do it. Kiana and her mother blame Viraj’s friend, Abhit Singh, for all of Viraaj’s vices. To top it all, Abhit is in love with Kiana even though she does not reciprocate. Sarthak is a work colleague and he is also Abhit’s friend. Then there are the Pillais whose children are also friends with them. The story revolves around their day to day life and also their troubles.

A book well written. The story has been written in a good flow and the language is simple. Kiana has been portrayed to be a mature girl taking responsibility for Viraaj and even talking to his friends for his betterment. But the end could have been better.

I received the book The Guitar Girl by Aniesha Brahma as a review copy from BookR3vi3ws and would like to than Debdatta for the same. This is Aniesha’s second book and has been written in a very different way. The story moves forward by way of Facebook chats and text chats also other than entries in the protagonist’s journal. The book is the story of a sixteen going on seventeen girl, Rhea Shah.

Rhea Shah, 16, studies in the tenth standard. Arjav and Sophie Ghosh are her best friends and the three of them keep getting punished for passing notes in the class. Out of school also, they keep in touch via facebook or text chats. So, one day she is really upset that her elder brother, Robbie, is coming home from college with his band, and mentions it to Sophie during her chats. Along with Robbie comes Joy Fernandez, his best friend, who now is very handsome, unlike the dork he was in school, and she feels that she has died and gone to heaven. She discusses this with Sophie and Arjav. Sophie tells her to communicate in a way that he understands. Rhea starts learning to play the guitar and starts her blog, Guitar Girl. And Joy starts following her blog. Unknown to Joy, she makes way into their band by way of being the lyricist and does not reveal her identity. Arjav and Sophie tell Rhea to confess her feelings or they will tell Joy who Guitar Girl is.

I loved the story and the style of writing. The author has described the tech savvy new generation well. The characters are real and likable. I loved Rhea and Sophie’s relationship. The story moves by the way of journal entries, Facebook chats and text chats. The text chats have been given different fonts for different persons, making it easy for the rader to understand who said what.

Liked the book a lot. Its short and sweet, perfect read for a lazy afternoon.

I received the book The Accidental wife by Simi K Rao as a review copy from BookR3vi3ws and would like to thank Debdatta for the same. This is my first book by the author and I was simply drawn into it. The cover is beautiful and so is the story.

Some accidents are meant to happen…

Dr. Rihaan Mehta is a brilliant young neurosurgeon who has no inclination for love or marriage. According to him wives and girlfriends are annoying accessories that one can do without. But when his mother dangles the sword over his head in classic Bollywood style, he succumbs, and sets out in search of a bride who would fit his ‘requirements’. But can Rihaan deal with what he gets instead?

Dr Rihaan Mehta, the only son of his parents, is a confirmed bachelor with no inclination to get married. He does not feel the need for female company nor is he bowled over by any girl’s charms. He enjoys his work as a neurosurgeon at Manhattan Clinic of Central Neurological Associates and his freedom. His mother wants him to get married and he tries to stay away from being tied down and visits his parents’ home only when it is absolutely required. And then his mother gives him the ultimatum in a typical Bollywood style: “Get married or see me dead” and he walks out of the family home back to his bachelor’s pad in New York. One day, out of the blue, he tells his mother that he would get married if and only if he could choose the girl entirely on his own, only to regret the decision.

In comes Rudra Jaiswal, Rudy, a stockbroker, and Rihaan’s childhood friend. Rihaan tells him that he wants to marry a girl who stays out of his way and minds her business and lets him mind his own and that he can find such a girl only in India. Rudy suggests the World Wide Web and the search begins. He finds the girl meeting all his requirements, Deepika, only to find Naina in his room on the night of the wedding. To top it all she says that she has done her duty to her friend and is now going away. He feels duped, hoodwinked, ripped off and two-timed and demands an explanation and compensation from her. His parents are arriving the next day and he now has to find Naina and convince her to play the part.

Thus, starts the story of confirmed bachelor Rihaan and his accidental wife, Naina with its ups and downs.

The book starts with a prologue when Rihaan Mehta has just got married and goes to his bedroom only to address his wife as Deepika, and she tells him that she is Naina and that she is leaving. The rest of the story moves in a flashback till we come to know who Naina is and why is she in place of Deepika and why does she want to go away.

The hindi dialogues make the book more interesting and the author has translated them into English making it easy for non hindi readers too. The plot is not unique but the author has presented it in a very refreshing way. The characters are very real and true to life. I was unable to keep the book down and kept on reading it late into the night.

A must read. Highly recommended.

I received the book The path is the Way by Mohit Badoni as a review copy from the publisher, Become Shakespeare and would like to thank them for the same. This book is the story of Captain Vijay Amrit Raj Sharma of the Rajputana Rifles.

Vijay Amrit Raj Sharma, a young Indian Army Officer is critically injured in a cordon and search operation, Struggling between life and death, he recalls the lessons that life and his grandfather have taught him. The young officer survives his gunshot wound only to find out that he has survived to pay back for his sins.

Embarking on a journey to find a way to wash away his sins, Vijay discovers love, friendship, passion, greed, despair and finally, hope.

Like a flowing river, The path itself becomes the way with an invisible world manifesting itself in the visible world to grasp the mysteries of human morality and the quest of redemption.

The books starts with Vijay travelling in an ambulance to the nearest hospital. He has been injured in an ambush by the terrorist’s bullet despite wearing a bulletproof jacket and is struggling for life. The doctor tells him that if he wants to live, he needs to stay awake and for that he needs to keep talking. And Vijay starts talking about himself.

Brought up by his grandfather, a poor temple priest, after the death of his parents, Vijay has been educated in the best schools in Mussoorie. He talks about his friend in school and the lessons he learnt from his grandfather and his friends in college, Philip and Radha. They are permanent fixtures of his life until he loses his grandfather and then Philip and Radha. He appears for various entrances and gets selected in the Indian Military Academy and then joins the Indian Army. Then the book comes back to the present, after he survives the gun-shot, he decides to quit. Then the books revolves around his conscious pinching him.

The story has been told in a very simple language. The book has been divided in two parts. The first part is the flashback when he starts relating the story of his life to the doctor and the second part is post recovery. The story has been written in first person from Vijay’s point of view. I felt that the editing is faulty at times like a few spelling mistakes, Radha’s description popping up in the middle without any reference and some punctuation.