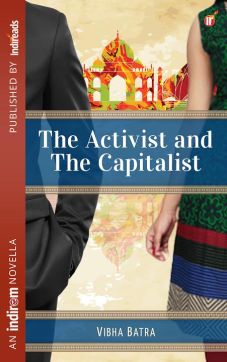 I received Vibha Batra’s The Activist and the Capitalist from the author herself as a review copy. It is the story of Anusha and Jai set in Chennai.

Jai Khanna, 28, one of the youngest entrepreneurs, became the CEO of VPK group after his grandfather retired. King’s Cross is his first project as CEO and he is passionate about it.

Anusha Iyer, 24, works for the Chennai Chapter of ITACC (Indian Trust for Art and Culture Conservation), an NGO. She joined the NCO after college and has continued to stay in Chennai after her parents moved to Coimbatore following her father’s retirement. Heritage conservation is her passion and so is baking and reading. She puts up a cupcake stall at her old college’s food fair every fortnight.

Anusha and Jai meet at a beach wedding. They go their separate ways and she continues to be in his mind. Six months later, Jai’s company buys Rasa Vihar, an ancestral property and they plan to build apartments for the rich. Anusha’s NGO is all out saving the heritage of the city and they meet again. This time they are at loggerheads.

He is drawn to her and tries to make amends, and they become friends and then her past and Rasa Vihar come in between them.

The story has been written in a steady flow and the speed does not slacken throughout the book. The language is simple and the characters are realistic. I loved it when he calls her Miss Firebrand Activist and she calls him Mr Hotshot Capitalist, this made the banter between them very real.

One thought on “The Activist and the Capitalist by Vibha Batra”