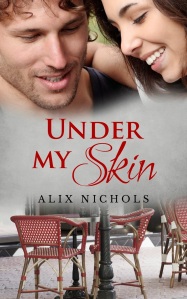 Under my skin by Alix Nichols is the second book in the Bistro La Boheme series. It is not exactly the sequel to the previous story, What if its love by the same author, even though it has the same characters as the previous book and the setting is the same Bistro La Boheme in Paris. I received the book as a review copy from Njkinny Tours and Promotions in exchange for a honest review. Thank you Nikita for the book.

Mat now works for his mother’s PR company and is the green candidate for the Mayor of Baleville. His girlfriend, his biggest helper and mentor, Cecile is a lawyer. Jeanne is now in line to buying the Bistro along with Didier, as Pierre is planning to retire, and is aiming for it. The meet and fall for each other. He is obsessed with her, has lost his drive and happiness and wants to get her out of his system but she does not want to settle for a temporary affair.

I loved the story, it was fast paced and the characters were very likable especially, Jeanne, the daughter of a baker family who is all out to buy the Bistro.