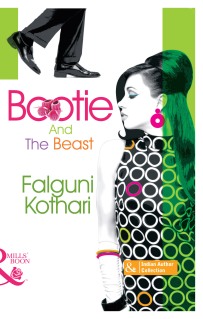 Bootie and the Beast by Falguni Kothari is the story of Diya Mathur and Krish Menon. They were the supporting characters in the author’s first book, It’s your move, Wordfreak. He is the protagonists’ brother and she, her best friend. They were engaged nine years ago when she broke off the engagement saying that she would never marry a dictatorial, ungallant, workaholic.

Diya Mathur, 30, is the daughter of dentist parents, Kamal and Lubna Mathur. She has an elder sister Priya Shroff, Pree, a gynaecologist. She grew up with the Menon kids, Alisha and her brother, Krish and the children called themselves the M brigade. As a kid, she believed in fairy tales, wanted to marry a real prince and called herself Princess DKM. She still does and has been in love with Krish and wanted to marry him since she was sixteen until her dream ended on the night of her twenty first birthday. Now, she is a super model, Party Princess of Asia, Queen of House and Kitchen and Brand Ambassador for the fashion label House of Scheherazade. She loves to cook and has all the possible skills like stitching, needlework. She loves the colour pink and almost everything she owns is pink.

Krish Menon, 35, is the Chief Financial Officer of Armadillo Farms and Foods and lives in Dallas. Diya was the first baby he held all by himself when he was five years old. Work is his religion, numbers his mantra and profit projection and spreadsheets, his portal to Nirvana. He idolizes her father and trusts him with everything in the world. He thrives on being the Beast of Burden. Being a true Menon, he runs far far away from romantic entanglements. She calls him the Beast and he calls her Dee-Dumbs. They haven’t seen much of each other in the last few years, work, life and their own hasty actions had got in the way of their friendship.

It all starts with a bootie that Diya buys for her friend Alisha and Aryan, as a lucky charm and then she is spotted by a fan at her sister’s clinic and the rumour mills start working overtime. Diya’s father asks Krish to let Diya stay with him till the rumours about her settle down, and Krish agrees. She comes to Dallas and finds that he lives in the house of her dreams. He convinces her to Neil, the grandson of one of her father’s patients, for a matrimonial alliance, by becoming her knave. Krish tells her that he loves her and wants to marry her, they get engaged but she breaks off the engagement once again.

I loved the line in the book which says, “Men are not equipped to deal with life’s vicissitudes”. The story is nice and sweet. The language is simple and the characters are lovable. Slight references to her debut book make it more interesting and the link works well. Krish is very nice, understanding and caring. Diya being Diya, is unpredictable.