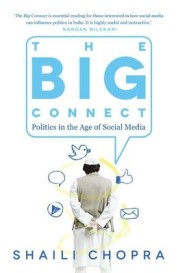 itics in the Age of Social Media by Shaili Chopra could not have been released at a more appropriate time than this: when the country is in the midst of the General Assembly elections. I would like to thank Vivek from Flipkart for sending me the book as a part of the Flipkart Affiliate Programme. The author mentions that this book came up as a result of a conversation with her friend over lunch on whether the social media is at the centre of politics in today’s world.

She has mentioned that social media and conferences have come as a cultural break and that it is quick and cost-effective way of sharing information. She has cited examples of how it is used to garner support and reach out to citizens. The author has mentioned the multiple media strategies used by political parties, discussed the various media in detail and also given instances of various events that broke on the social media. She mentions that it is an interactive form of engagement and also helpful and has a wide extent of coverage. She has cited the use of the social media in the US elections of 2008 and 2012 and goes on to discuss the social media and the 2014 General elections in India.

Book Source: Review copy as a part of the Flipkart Affiliate Programme

2 thoughts on “The Big Connect: Politics in the Age of Social Media by Shaili Chopra”